A Case Study in Audacious Leadership

04.08.16 Comments Off on A Case Study in Audacious Leadership

In 1976, the women and men who collaborated to found Blackburn Center Against Domestic & Sexual Violence figured their rape crisis center wouldn’t be around very long. In the midst of the momentum for women’s rights at the time, the founders thought the problem of violence against women would be solved in a few years.

But the need for services did not diminish. The Center grew over the next two decades to include a broad range of high quality services to victims of sexual and domestic violence. It was in planning the organization’s 25th anniversary that the leadership of the agency committed to refocusing on the culture changes needed to end domestic and sexual violence.

In its 40th year, the Blackburn Center releases this report, A Case Study in Audacious Leadership. 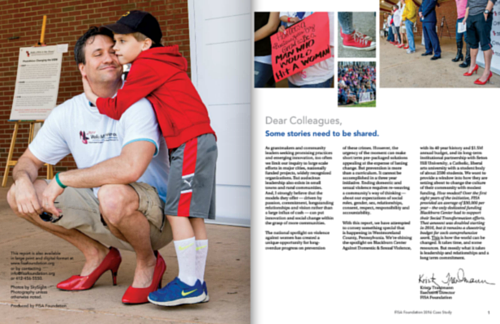 We hope you’ll take a moment to flip through it and learn about the critical work our partner has done for decades to change the culture and end domestic and sexual violence.