Not an Event, A Movement 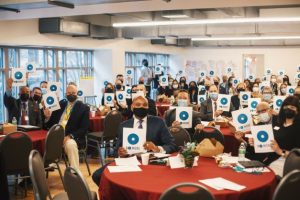 o kick off International NO MORE week, 60 corporate, civic, and community leaders convened for the annual Leadership Breakfast to Prevent Domestic Violence. The event was hosted by United Way of Southwestern PA, Southwest PA Says NO MORE, STANDING FIRM, and the FISA Foundation.

This year’s event, held at the Benedum Center, was a beautiful venue for leaders to convene once again in person. The speakers discussed the role of a workplace in recognizing, supporting, and intervening on behalf of survivors of domestic violence.

Set against the backdrop of the current tenant of the Benedum, Hamilton: An American Musical, a repeat refrain was best expressed by Mayor Ed Gainey. He stated that this “is a movement, not just an event”, echoing the sentiment that “this is not a moment, it’s the movement” of the show currently playing in that same theater. 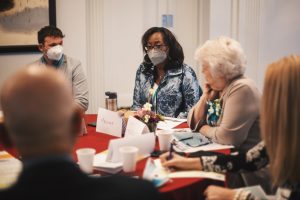 With that idea in mind, it was important to not just inform and rally the leaders in the room. It was important to dig into real, tangible, and actionable steps that employers can implement with their employees.  Attendees broke out into working groups to discuss how to implement these ideas and best practices at their workplaces.

Often domestic violence is seen as an issue in the home, but a workplace has an important role in disrupting that cycle of violence — especially when companies normalize reaching out for help and make prevention part of the company’s culture. Workplaces are often one of the few places where a survivor can reach out for help away from their abuser. When workplaces have established policies and make employees aware that their job is a place where domestic violence is not tolerated, people can confidently reach out knowing they will be heard and helped.