It Starts by Believing We Can 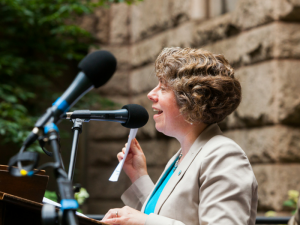 The best part of running a small grant-making foundation is that I meet people every day who are doing extraordinary, brave things that they believe from their guts are the right things to do. And my job is to figure out if we can help them. As you can imagine, there are a lot of great days, and every so often, there is a day that changes everything. December 1, 2011 was one of those days for me.

It was the day I heard Dr. Elizabeth Miller, Chief of Adolescent Medicine at Children’s Hospital of Pittsburgh, present some preliminary research findings on Coaching Boys Into Men, a sexual assault prevention program in which high school coaches had been trained to talk to their male athletes about healthy relationships and respect for women. The young men learned how to communicate, what it means to consent to intimate acts, what is unacceptable locker room talk, and how to intervene if peers are acting disrespectful or abusive. These coaches used their influence to draw a clear line and say, “this is the kind of character I expect from my team.” And it worked. Three months after the end of the 12-week program, boys who participated were less likely to perpetrate abuse and more likely to speak up if they witnessed abuse.

I was stunned. This data pointed to a concrete, reasonable strategy. Prevention of violence against women became tangible for me. On the short drive back to the office that day, my curiosity became a commitment: If there was something we could do, then we had to do it.

For decades prevention almost exclusively meant talking about “risk reduction” or teaching young women to avoid being vulnerable: travel in groups, dress conservatively, watch your drink at a party, recognize warning signs and get out of abusive relationships as quickly as possible. These strategies all take for granted the fact that rape and abuse is inevitable, “boys will be boys,” thus allowing it to continue. The prevalence of sexual assault and domestic violence made us feel helpless and impotent. And we have passed this hopelessness on to our daughters too.

But the tide is turning. The tenor of public response to high profile abuse scandals has been distinctly different over the last couple years. Men are joining women in demanding that abusers be held accountable, and criticizing institutions that fail to act decisively. Growing numbers of high school and college coaches in this region have begun implementing Coaching Boys Into Men. Hundreds of men in southwestern Pennsylvania have sought training to challenge the culture that minimizes violence against women as private or personal or inevitable.

In the absence of guidance from trusted adults, kids will rely on the sources of information available to them: pop culture, social media, pornography. Too many of our young people fail to recognize that sex without consent is rape. Only a few years ago, a quick drive away in Steubenville, Ohio, we all watched, riveted, as the tragedy unfolded. A young woman was victimized by multiple young men, and the rapes were documented in real time on social media. Scores of kids saw what was happening while it was happening. If just one of them had objected, had told an adult, had asked for help, things might have taken a different course. This failure to intervene could have happened anywhere, and probably has. The blame and responsibility for Steubenville does not just fall on the young bystanders. In fact, the tragedy highlighted a profound failure of adults to guide and instruct.

It can feel incredibly awkward to initiate conversations with a ‘tween or teen about sexuality and navigating intimate relationships, but we have a responsibility to do so. Most of us can imagine the kinds of adults we would like the children in our lives to become and the kinds of relationships we hope they will find. When I think of the men I hold up as role models, I think of men who have integrity, who are respectful, compassionate, thoughtful and involved partners and fathers. But our culture teaches boys that manhood is about toughness, invincibility, domination – to have no fear and show no emotion, and to treat women as sexual objects to “score.” There is a profound mismatch for boys, as there is for girls. We must articulate the gaps between pop culture and reality. It’s our responsibility to make sure our young people can imagine strong, healthy relationships for themselves, to recognize abuse when they see it, and to have the skills and the fortitude to speak up.

It is in our power to act to end domestic and sexual violence, and it starts by believing that we can. The question is: are we brave enough to act? I think we are.

Kristy Trautmann is the executive director of FISA Foundation.