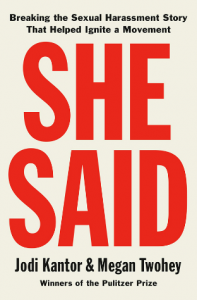 Pulitzer prize-winning journalist Jodi Kantor will be coming to Pittsburgh with She Said: Breaking the Sexual Harassment Story That Helped Ignite a Movement, written with Megan Twohey. The two reporters broke the news of Harvey Weinstein’s sexual harassment and abuse for The New York Times. She Said tells the untold story of their investigation and its consequences for the #MeToo movement.

For years, reporters had tried to get to the truth about Harvey Weinstein’s treatment of women and the long-circulating rumors of his wrongdoing. When Jodi Kantor and Megan Twohey began their investigation into the prominent Hollywood producer for The New York Times, his name was synonymous with power. Persisting, Kantor and Twohey were able to convince some sources to go on the record, setting in motion a dramatic final showdown between Weinstein and The New York Times.

In the tradition of great investigative journalism, She Said tells a potent story about the power of truth. Kantor and Twohey describe the consequences of their reporting for the #MeToo movement and the inspiring and affecting journeys of the women who spoke up—for the sake of other women, for future generations, and for themselves.

*If we cannot gather in person according to the CDC’s guidelines, Jodi Kantor will record a virtual event video for everyone to watch at home. If we are able to gather in person, we will also livestream the lecture for all ticket holders who do not wish to come to the lecture hall. If you have any questions please email us at info@pittsburghlectures.org.