During NO MORE Week in March, sixty corporate executives met to review progress and discuss opportunities for taking action to prevent domestic violence and sexual assault.

Coaching Boys Into Men, the Father’s Day Pledge to End Gender Violence, addressing partner violence in the workplace, and ending campus sexual assault were all on the agenda for the third annual Corporate Leadership Breakfast to End Violence Against Women.

“This community gets it and is a role model for other communities,” said Jane Randel, co-founder of the National NO MORE Campaign, in her keynote. Randel went on to explain how violence impacts every community, and corporate leaders are in a unique position to take action.

Dr. Pat Cluss, director of STANDING FIRM, followed by saying “employees want to do the right thing, but they need to know what that right thing is.” She made the point that in cases of partner violence, appropriate response protocol is not always obvious, but organizations like STANDING FIRM can help companies prepare to address it.

Westinghouse High School student-athlete Jeremiah Nash spoke alongside his football coach Monte Robinson about Coaching Boys Into Men. The program “is an intentional way to open up the dialogue with our young men,” explained Robinson.

Dr. Chris Howard, president of Robert Morris University, spoke on behalf of the 10 colleges and universities that comprise the Pittsburgh Council on Higher Education (PCHE) when he said “we are proud to be committed to practices of excellence to make sure everyone feels safe on our campuses.”

The leaders in attendance were asked to commit to concrete action steps. Many left feeling inspired and ready to do their parts to end domestic and sexual violence. 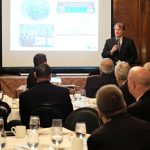 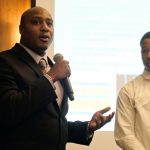 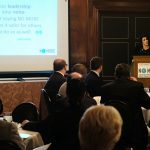 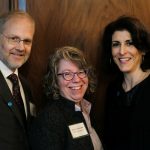 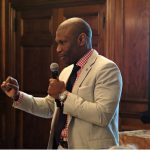 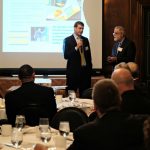 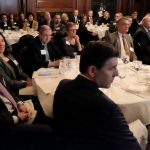 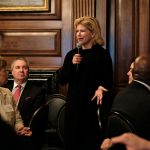